Skip to content
HomeThe Mentoring Process: Steps Along a Path 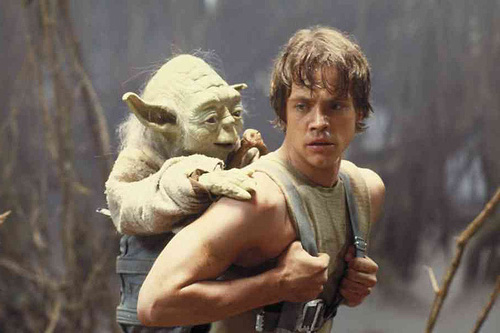 Taking a cue from the Star Wars universe, mentoring can sometimes feel a lot like Force-sensitive training: a mysterious process that’s difficult to access.  I realized this mystery, sipping on Starbucks while attending the Association for Counselor Education and Supervision (ACES) conference in October.  However, I did not take time in the moment to fully process what the realization meant.

I experienced this “awareness”, for lack of a better term, again when I was introduced to a publisher at that same conference by a colleague of mine.  Again, too many distractions existed at the moment to give it any kind of deep thinking or reflection.  I felt this “feeling” again a couple of months later when I was discussing the benefits and risks of submitting an academic book prospectus to the same publisher I met at the conference.  Well, it more than just about the benefits and risks of writing the prospectus…it was also discussing the risks of taking the time to write a book at the same time I’m writing the dissertation.  More to come about that process in another post!  But this was the moment it fully hit me, and I took enough time to reflect about this experience.

This “awareness” or “feeling” was the realization that I was gradually being mentored by someone I respected.

Once I realized what has happening, I was curious and asked myself the following questions: How did this process take place?  Where did it begin?  What have we done that has led to this process developing?  Why haven’t I noticed it before now?

By chance I started reading my old blogs, and I noticed that the mentoring trail was clear.  This trail involved concrete steps along the journey, even though I was not aware or conscious that the mentoring process was taking place.  Here are some markers along my path of being mentored.

1 – Mentoring starts like any other relationship: a chance meeting.

My mentor and I met at a regional SACES conference.  He attended my roundtable presentation on using Motivational Interviewing as a supervisory model.  Actually, I wrote about some of these experiences in a former blog.  After the roundtable, we started talking one-on-one.  Soon after that, we were discussing similar research interests, as well as other interests that were different.  I remember enjoying his sense of humor and calm demeanor.  We exchanged contact information, and I resolved to keep in touch.

When the ACA conference approached, I reached out to him in advance.  We already emailed each other as a follow-up to the regional conference months ago.  I explained that I would like to speak with him about his teaching experiences as an Assistant Professor at his university and also wanted to discuss our similar interests.  He agreed.  At the conference, not only did we spend time talking about professional things, but we also talked about some personal stuff.  We ate lunch together.  He met my wife.  I met his mentor.  We laughed a lot.  I wrote about these experiences here.  As I reflect back, this is a launching point for our relationship.

3 – Mentoring is enhanced by collaborating on projects.

Again, I am realizing how many blog posts chronicled the steps that enhanced this mentoring process without realizing what was occurring in the moment.  We discussed ideas about writing together for an ACA conference presentation.  Eventually, this resulted in us collaborating about a topic and submitting a proposal.  These experiences are located here.  Later we learned that our proposal wasn’t accepted, but the lessons learned from the collaborative process were well worth the time.

4 – Purposeful mentoring includes a modeling of how to build new relationships that expand opportunities.

At the recent ACES conference in Philadelphia, my mentor said multiple times that he wanted to introduce me to a publisher.  My mentor recently published his first book, and this publisher’s relationship with him was crucial to his success as an author.  He wanted me to talk with her.  So at the conference, he introduced the two of us.  Immediately we connected and started talking.  She continued to ask me about my clinical work and writing interests.  Our first conversation ended.   My mentor advised me to see her again before the end of the conference.  I later stopped by her booth as he advised.  She asked me if I would be interest in authoring a book on an interest of mine.  And a couple of months later, I submitted a prospectus for her review!

I wouldn’t have experienced this interaction without my mentor providing me with the opportunity.  And I surely would not have known a little more about how publishing (books, that is) works without observing him in action.

Mentoring can feel like an ambiguous, mysterious, and intangible process.  While there were times when I didn’t know it was happening, my mentoring process was one of concrete steps as I look back.  In other words, my process was not fully realized along the way but became clearer over time.  So if you’re asking yourself, “How do I help facilitate the mentoring process?”, then maybe this will provide one example of a possible road map to your destination!

I am interested in hearing from you.  What are some other ways you have facilitated the mentoring process either as a mentor or mentee?